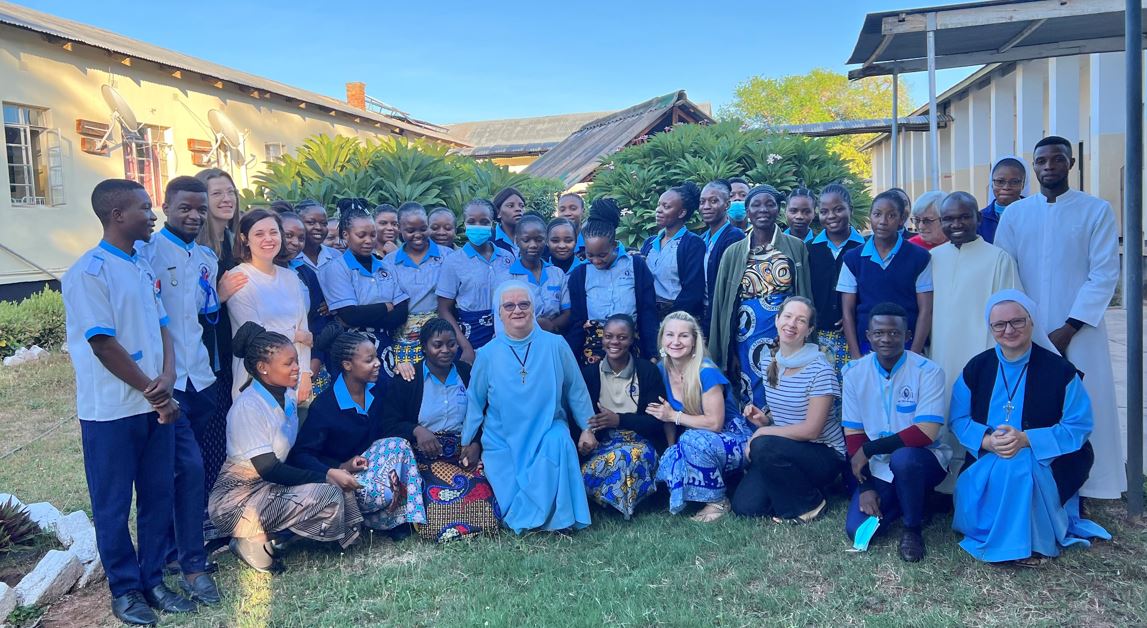 The Congregation of the Little Servant Sisters of the Immaculate Conception, the Little Servants of the Virgin Mary in short, was established on May 3, 1850. It is a religious habit congregation that focuses on the external apostolic and charitable activity. Our vocation is to implement the gospel commandment of loving God and your neighbour by following Mary, the most humble handmaid of the Lord, taking care of children, as well as helping those in need and nursing the sick. We draw our strength to perform the service from daily Eucharist and prayer.

There are four autonomous branches of the congregation founded by Blessed Edmund Bojanowski: in Stara Wieś, Wrocław, Dębica, and Luboń.

In the following paragraphs we will focus on the history of just the first of these branches.

The life of our Founder

Edmund Bojanowski was born on November 14, 1814, in a midle-class family in Grabonóg near Gostyń, Poland. His parents were Walenty Bojanowski, who took part in the November Uprising and was awarded the Military Cross of Merit, and Teresa, née Umińska. Both of them played a powerful role in his life and shaped his sensibility to human poverty and to patriotism, as well as the importance of the prayer.
Because of Edmund’s poor health, the boy was home-schooled. He was particularly fond of literature and history. Over time, he undertook studies at the University of Wrocław and then continued it in Berlin. Unfortunately, due to progressing tuberculosis, he never graduated.
After returning to his homeland Edmund became involved in the Kasyno Gostyńskie social club where he could, for instance, establish public reading rooms. During the cholera epidemic in Greater Poland (PL. Wielkopolska) in 1849 he took care of the sick, particularly orphan children, on his own initiative. Edmund even established the Institute in Gostyń that operated as both an orphanage and a small hospital for the poor. Soon, in Podrzecze near Gostyń the first rural poorhouse (PL. ochronka) for children started operating. That’s where Edmund created an education scheme; this scheme was executed by young women who were trained by Edmund himself: they took care of the children and served as teachers. This initiative became the beginning of the Congregation of the Little Servants of the Virgin Mary.

In 1869 Bojanowski entered the divinity school in Gniezno, Poland, which he had to abandon rapidly because of his deteriorating health. Just before he died, he settled in his friend Stanisław Gieburowski’s parish in Górka Duchowna near Leszno, Poland. He died on August 7, 1871.
Edmund Bojanowski was beatified in 1999 by Pope John Paul II.

Key dates in history of the Stara Wieś Little Servants

The first poorhouse in Galicja was established on November 30, 1861, in a village near Łańcut called Podzwierzyniec. Less than a year later, a novitiate was opened; it was relocated to Stara Wieś near Brzozowo on December 2, 1863. Gradually, new facilities began to be established. This development process was interrupted by the partitioning powers. The only way to stay on these lands was to break the unity with the Sisters from Wielkopolska.
In September 1870 Maciej Hirschler, the bishop of Przemyśl, approved „Reguły” (principles) of the Little Servants. On February 27, 1875, the Austrian authorities granted the congregation the rights to exist and to grow.

Congregation of the Little Servants began to develop dynamically. As of year 1914 it reached 985 Sisters in 237 facilities in przemyska, lwowska, krakowska and tarnowska dioceses.
As of year 1921 there were 253 facilities and 1085 Sisters. On the eve of the World War II the number of Sisters reached 1535 in 332 facilities.
1939-1945 wartime, deportations, arrests, diseases and mortality subsequently shrunk the number of the Sisters to 1307. Unfortunately, the congregation has lost 120 houses which remained beyond the Poland’s eastern border.
The first post-war years enabled Congregation of the Little Servants to reactivate many of its facilities and to establish new ones, and that includes the areas on Śląsk, Ziemia Lubuska, and Pomorze Zachodnie. Sadly, soon, the situation started to deteriorate. During the years of the communist regime the congregation suffered frequent harassment by public administration such as removals from public facilities (kindergartens, orphanages, hospitals), asset forfeitures, closures of the establishments, evictions from the occupied premises, penalties, interrogations. The number of poorhouses during the communist period dropped from 174 in 1947 to 20 which functioned under the name of “przechowalnia dzieci” (nursery) or “punkty katechetyczne” (catechetical corners).
The transformations that took place in Poland after 1980, and particularly after 1989, allowed the Sisters to take care of children in kindergartens and poorhouses again: from now on the catechist sisters worked in schools and public kindergartens. They were also re-employed in hospitals.

Currently, Congregation of the Little Servants consists of 1250 Sisters in 230 facilities. There are 167 facilities in 4 provinces in Poland: przemyska, krakowska, tarnowska, and lodzka. The rest of the houses are located outside of Poland: 10 houses in Ukraine, 3 in Moldova, 4 in Russia, 4 in Western Europe, 6 in the USA, 1 in Jamaica, 1 in the Philippines, and 34 missionary facilities in Africa.

Since its inception the Little Servants rush to help whenever the help is needed. One of the ways to do it is missionary activity.

In 1928 the Sisters arrived to Africa for the first time. They settled in the Jesuit missionary facilities in Chingombe and Kasisi and immediately started educational work among women and took care of the orphanage. Over time they started to establish more and more poorhouses, dormitories, and a hospital. Moreover, the Sisters worked as teachers in primary and secondary schools.
The Sisters work also in Katondwe. Since 1939 they operated in a small missionary hospital where they looked after the sick, mostly lepers. They also ran the kitchen, handled a sewing facility, and a sacristy.
From 1954 young women from Karenda that found their vocation in God and helping people could join the novitiate. As early as the year 1969 the number of the African Sisters exceeded the number of the Polish Sisters. Young Polish women who found themselves in Africa after World War II and wanted to join the congregation could start in the newly opened novitiate in Johannesburg.

At the moment there are 25 facilities in Zambia (Kasisi, Bwacha, Katondwe, Lwitikila, Mansa, Chamuka, Kashikishi, Lusaka, Chalabesa, Chingombe, Mulungushi) and 4 in South Africa (Johannesburg, Mahobe, Matatiele, and Port Shepstone). This is where the Polish and African sisters work together. There are also the African Sisters in 3 facilities in Malawi (Lilongwe, Newlands, and Nkhota) and 2 facilities in Tanzania (Kiabakari and Shirati). Overall, the Sisters operate 22 kindergartens, 10 primary schools, 5 secondary schools, 1 orpahange, 2 hospitals, 4 clinics with small hospitals, and 1 nursing home for the elderly.

Since 1991 the Little Servants opened up to the needs of the Church in Republics of the Soviet Union. They work in a Russian nunciature in Moscow. Since 2000 they also work in Siberia (Angarsk, Bratsk, Chita), Ukraine (Bialoboznica, Boryslaw, Horodkiwka, Mohyliv-Podilskyi, Murafa, Obertyn, Odessa, Poninka, Vinnytsia), Moldova (Cretoaia, Rybnitsa, Stauceni).
Significantly, the congregation records many vocations from all these areas.

Check out our news feed:

We use cookies on our website to provide you with the most appropriate experience by remembering your preferences and repeating your visits. By clicking "Accept Cookies" you agree to use ALL cookies. However, you can visit "Cookies Settings" to give your controlled consent.
SAVE & ACCEPT
Powered by